Sacred Order of the Venus Templars

founded and created by Nicole Christine Note from Cayelin: I have captured this information from the late Nicole Christine’s website and offer it here in honor of her vision and what she brought through from 2006 to 2008.

As a founding member of the Sacred Order of the New Earth Venus Templar’s and being tasked by Nicole to include the Venus Cycle in her Divine Creation High Priestess process that she asked me to carry on two days before she died (October 18, 2008) I offer this page that includes some of Nicole’s writings about the Venus Templars.

Many of us still work with this energy on the inner and by visiting the Temple Nodes on the Earth. If you would like more information contact me through my website at cayelincastell.com or visit magdalenemysteries.com.

My intent for the future is to add thoughts and insights about how to continue taking the seeds of what has already been created and giving them what they need to bloom!

Below is a 2019 Video looking back to mid-90’s and mid 2000’s with Me and Nancy Safford (she died in 2020)
Focusing on the Venus Temple Nodes and other Cool Venus related Ceremonies
More on Venus and her powerful cycle at VenusAlchemy.com

Nancy and I co-led a group to France in 2007 I wrote a story about one of my experiences there – https://cayelincastell.com/cathar-castle-and-the-time-portals/

Born March 2, 1946 Died in Sedona, Arizona July 10, 2020 at the age of 74. A photojournalist in the U.S. and France, she was an ordained Priestess of the Magdalene Mysteries in the Lineage of Nicole Christine, an honorary member of the Knights Templar, a shamanic healing practitioner and a leader of adventures and explorations of sacred sites in Sedona and France.

Through the power of divine guidance and inner authority, New Earth Venus Templars are in service to Divine Creation in accordance with the Divine Design for their individual and shared lives. 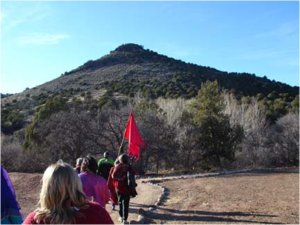 These animating light body codes are seed points of our innate gifts, capacities, and passions that are pressing to the surface of consciousness for release at a time when it is essential for us to actualize our fullest divine human potential and co-creatively construct a New Earth. Corresponding, a Venus Temples Process emerged out of the work done by Magdalene Sisters who bridged the seven temples energies at the Temple of the Midnight Sun in France in September 2006 and 2007. (See the Venus Temples Manual by Nicole Christine available through Magdalenemysteries.com)

This bridging ceremony took place at La Pique, which is the center-point of this Venus Temple pentagram. La Pique overlooks La Val Dieu, the Valley of God, where according to a 1999 Akashic Record reading by Maia Nartoomid, in 1678 BC, I, two other priestess sisters (Cayelin Castell and Gina Gavaris), and the soul that was Mary Magdalene (prior to her historic incarnation with Christ) took vows to fulfill the planetary purpose of the soul of the Magdalene.

In that reading, Maia said, “Magdalene is calling you Hespara, which is derived from Hesperus, which means Venus. There is a strong energy of the Goddess principle of Venus connecting the two of you. She indicates that the point of recognition, fulfillment, and dedication you feel in your connection to her is anchored in the Temple of Venus in the Earth.”

By returning to our vow-making locale in 2006 (Cayelin and Nancy Safford returned with a group in 2007), that connection was reactivated and the next level of service to the planetary purpose of the soul of the Magdalene was charged. That level was anchored in the Ruby Fire Venus Temple in the USA on February 3, 2007 when thirty-five priestesses, priests, and partners initiated as founding members of the New Earth Sacred Order of Venus Templars (SOVT). Members of this order are in service to Divine Creation in accordance with the Divine Design and Divine Timing for their lives. This service includes attunement with Venus Temples that contain seeds of light that aid us in our planetary transition into the New Earth Star. Venus Templars willingly and appropriately: access and amplify the light codes within the planetary Venus Temples; tend the planetary Venus Temples, within and without; access, amplify, and express the Life Animating Codes in their Light Bodies and DNA; assist others in accessing, amplifying, and expressing their Life Animating Codes.

Code of Honor
Restore honor among men and purity among women through the Wisdom of Divine Intelligence and the Power of Divine Love in Oneness With the All.

The Venus Temples hold the keys to a large movement of celestial forces as they interact with the planet through the “Venus nodes” on the earth to reveal the “truth of the Sacred Wedding” in the heavens and Venus’ essence in her role of celestial guardian of love and beauty to us on Earth.

These temples are the wombs containing what could be called “Seeds of Light” for an Age soon upon us, when Venus, our Sister and Guardian in this solar system, will aid us in our transition into the New Earth Star. This process has indeed already begun! Temple names are in “Aloii”, the most ancient of languages, derived from the electrical waves in the brain, that when firing, create actual “fire letters”. This is true for the electrical impulses in the heart-brain (the neurons within the heart) as well.

A’ratu – Temple of the Golden Flame on the slope of Mt. Ararat, Turkey — holding the codes of the First Principle — the Word, Logos of the See. Golden Flame

Manutansha – Temple of the Midnight Sun – The Temple in France is the place of Sanctuary, Still Point, Hope for the Future, Inverted Ray (Flame) of Midnight that will in the future release the GUIDING RAYS OF ESCHATON.

Esh’una – Temple of the Heart Tone – Beneath the Alhambra, in Spain – Heart of the Dove – Violet Flame of Divine Accord, Harmonizing the Rhythms through the Holy Tone.

Ruha’keesh – Temple of the Ruby Fire – Sedona, Arizona is the Path of Qualifying The Nature of the Divine Feminine. It is the Ruby Fire… the burning away of all dross to see the true form.

*The Atlantean Canary Island Venus Temple Node was activated December 27, 2007 through January 6, 2008 after being dormant for 40,000 years.

All the information on this page was on Nicole Christine’s website.

Initiation
Through the power of divine guidance and inner authority, members of the New Earth Sacred Order of Venus Templars initiate in service to Divine Creation in accordance with the Divine Design for their lives. This initiation transpires in Living Ceremony, facilitated by a Venus Templar Guide and witnessed by one or more initiated Venus Templar members.

Titles and Degrees of Initiation
Titles held by Venus Templars represent functions they have agreed to fulfill. Degrees held by members represent the degrees of activational exploration of Venus Templar mysteries they have chosen to pursue. In the spirit of the Sacred Circle or Round Table, none of the titles or degrees is hierarchical in nature. In New Earth consciousness we co-create with Spirit and one another.

Venus Templars Logo
During Magdalene Lisa Michaels’ trip to France in 2006, she saw the connection to the equal-armed Templar and Languedoc (Toulouse) crosses and the sacred geometry formed with the solstices, equinoxes, cross quarter points, astrology archetypes, and the elemental forces.

The equal-armed cross, enclosed by a circle, shows the connection to the wheel of the year and the axis of the cardinal zodiac points of Capricorn/Cancer, the feminine axis, crossed with Aries/Libra, the masculine axis. Often inmystery school traditions the cross is shown with a rose at its center,letting us know thatthe hidden meanings lies “sub rosa” or under the rose.

The rose is the sacred pattern that Venus makes in her celestial travels and shows the connection to the Venus Temple nodes. Together, Lisa and illustrator/graphic designerHigh Priest Prescott Hill co-created what was originally the logo for the 2007 Priest/ess Community Convergence. With their permission, it is now the Venus Templars logo and seal.